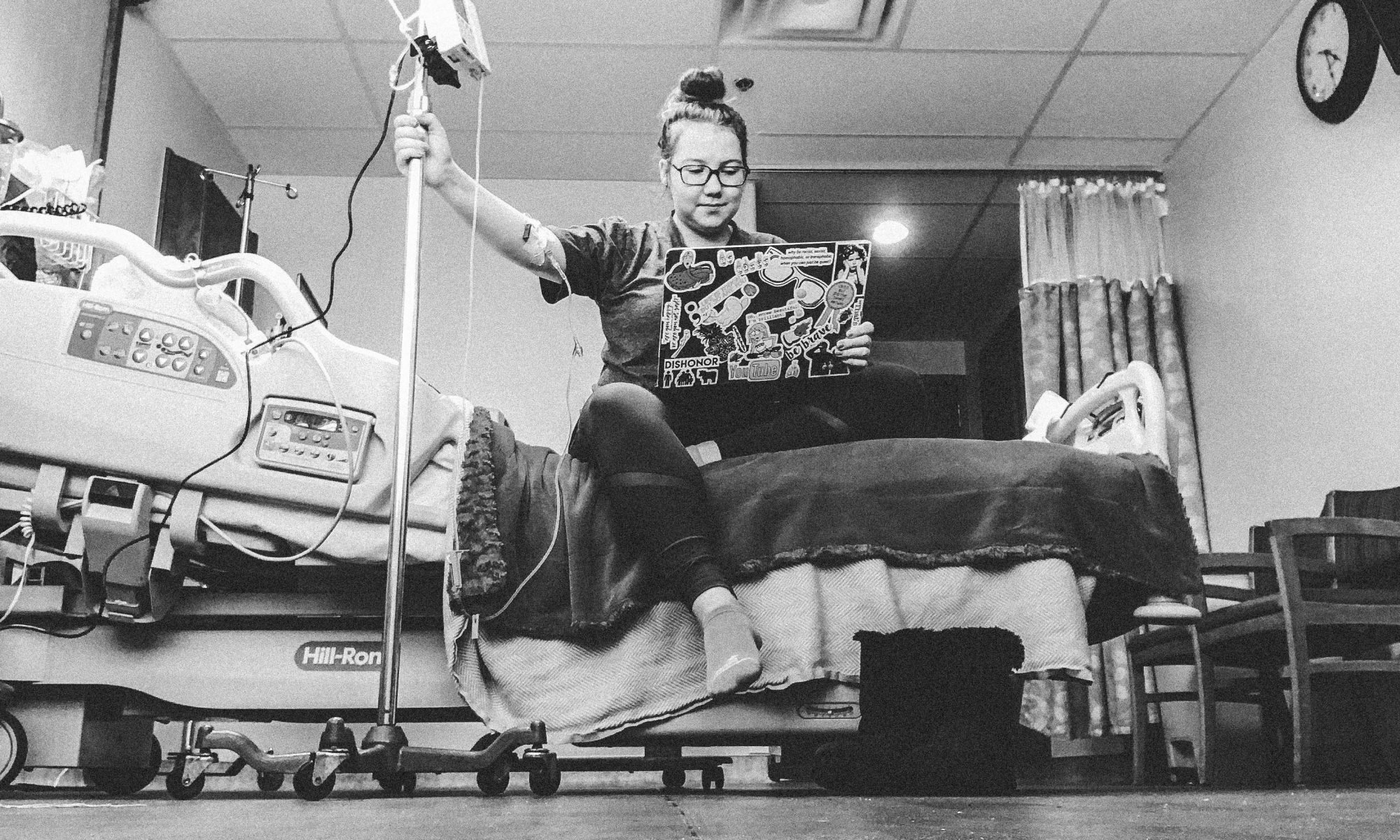 2018 was an amazing year. It was the year that I found new friends and visited old ones. I went on road trips and adventures. I loved more than I have ever loved before and it was spectacular. It was the year I crossed things off my bucket list and made unexpected memories. At least that’s what my Instagram account will tell you. The truth is in 2018 I broke a new personal record for the lowest I’ve ever fallen. This is impressive because I’ve had a few low points in my life. In 2018 I was grasping at straws as I continued to fall. I was crying out trying to get a hold of something to pull myself up higher, but somehow, I kept falling. I came face to face with the biggest battles I’ve ever endured, and I didn’t tell anyone. I didn’t tell my family how bad it got. Most of my siblings don’t even know what happened. I told a few friends, but I brushed over it like it’s still in the past. But the truth is that still to this day I’m terrified, because I know that even if I try my hardest, I could still go back to that place.

In 2018 I had a few bumps and bruises, I guess you could call them. See I stepped off a curb on a particularly stressful day and sprained my ankle. I was on campus at the time in between classes and the campus police had to take me to the health center. With my friend sitting in the waiting room the doctor told me that they were pretty sure I broke my tibia. (That’s a bone in your lower leg.) I didn’t know what to do and I really didn’t want to call my mom because the thing was my little brother just broke his ankle the day before. So, I waited till the last possible Second to finally call my mom and let her know I was on my way to get some x-rays done. Thankfully there were no broken bones, but I did tear a few ligaments in my ankle. I was put on crutches and told to “ice and elevate.” This wasn’t the first time I’ve been told this in my life, so I knew what to do. A few days later I was trying to manage crutches while going upstairs at my parents’ house when I fell and hit my foot again. This time I rammed my foot straight into the stairs and it began to swell so much that I couldn’t put my brace on. So, the following Monday I had to get more x-rays done and found out I tore another ligament, this time in my lower foot. It was going to be a long recovery, but they decided crutches were more of a hindrance than a healing helper, so I was put into a massive boot for six weeks.

I am very thankful to have a car. It’s not the best car, it’s definitely not a Tesla, but for the most part it runs okish. Perhaps the best part about this car is that I have never had to pay a car payment on it. However, the first week that I was finally cleared to drive after spraining my ankle and spending way too much money on Ubers, my car developed a rather bad habit. My car decided to stop working in the middle of multiple streets at the most inconvenient times. After multiple trips to the mechanic this problem is for the most part fixed. But over the course of one week my car broke down three times and I got well acquainted with the Fort Worth Police Department for helping me move my car out of the middle of the road while I was still wearing a boot. If you own a car you know that this can be a stressful situation as I started to calculate how much repairs were going to cost and how my family was going to be able to afford this.

A few days after my car was fixed, I went to bed with some pretty intense cramps. At this point it was mid-October and I figured it was just normal female stuff. I realized I was wrong a few hours later when I woke up in excruciating pain. See, I have had pain before on the lower right side of my abdomen, but this felt different. Due to the fact that my body really isn’t perfect I am prone to getting cysts and have gotten them quite a few times over the years. Every single time I have been hospitalized for this problem it has been a cyst on my right ovary. But they always get worried that it is my appendix, because my appendix is also down there in that same area and it is a sharp shooting pain. The doctor always told me not to worry about the sharp shooting pain unless I am vomiting. It was while I had this increasingly sharp shooting pain that I took cornstarch on schedule. Over the next hour I ended up vomiting over 10 times. I was lying on my bathroom floor wondering if I would ever be able to get up.

At this point I remember calling my mom and saying I’m not sure if there is something wrong just because of the pain, but I was more worried about my blood sugar. And I was exactly right to be worried about this. My mom came and drove me to the hospital where I had to wait hours for the doctor to finally get that I understand my own body. I underwent multiple scans including a sonogram and a CT scan. They ruled out appendicitis and an ovarian cyst. Then they finally took my word for it and listened to my specialist – they tested my lactic acid. At the moment that they ran the test I had been lying in a hospital room for over four hours unable to keep anything down. The nurse who I’m sure had great intentions was telling me that there’s no way my lactic acid was high. “Anybody with a high lactic acid would be unresponsive or at least lethargic.” And due to the fact that I was sitting up talking to her proved my lactic acid was normal so there must be some other reason that I was in pain.

To put this in perspective a normal person and even patients with Glycogen Storage Disease should have a lactic acid reading of less than two. To the nurse’s astonishment and my utter disappointment, the lactic acid came back at a 6.9. I was hospitalized and admitted due to lactic acidosis.

Lactic acidosis is a dirty word to me. It’s that dark cloud that comes over all of the people with GSD. You see we’re prone to this. We’re prone to this thing that makes our own blood toxic. And worst of all, because we don’t show as many symptoms and because our body takes longer to heal, lactic acidosis has a reputation of killing patients with GSD. This disease we didn’t choose to live with.
I knew as soon as the nurse told me that it wasn’t good. I didn’t need the full explanation and honestly, I was a little too high on morphine to fully comprehend the severity. But there was a moment, in between my mom heading home and my friend getting to my hospital room, where I was left alone. I was actually quite thankful for this and I knew my mom needed to leave because my little brother was getting surgery the next morning. But in this alone time, I found myself doing something that nobody should ever do. In fact, I think this should be illegal. Sitting alone in my hospital room at night overlooking the skyline of Fort Worth, Texas I decided to Google the mortality rate of the thing I was diagnosed with. “What is the mortality rate for lactic acidosis?”

I already knew that it wasn’t good, and it could be fatal. But what I didn’t expect was a 75% mortality rate for normal people. So as a patient with GSD I knew my chances of surviving were even lower. Yet still, sitting in that room, I didn’t tell anyone. I didn’t tell my best friend who spent the night in the chair next to my hospital bed that I could die. I didn’t post it online for people to pray for me or even tell my siblings. I didn’t call my little brother at boot camp or my older sister at work. You see, I didn’t want to be overdramatic. I didn’t want to get anybody else worked up. I just sat in that hospital room with my ice chips and wondered what I could’ve done differently to prevent myself from getting here. Because I’ve been taking my corn starch and I’ve been trying to eat right and I was walking as much as I could, but I was still in this situation. So how was I ever supposed to get better if I was already giving everything I had, yet I was dying?

The truth is, I still don’t have an answer. It has been months since I laid in that hospital bed trying to figure out what I did wrong. That was the problem though, it wasn’t my fault. I was stressed about my car breaking down, my ankle taking forever to heal, my little brother going off to boot camp, the three tests I had that week and so much more that my body physically couldn’t handle it. I was taking cornstarch, eating right and walking as much as I could in my boot, but my body couldn’t handle the stress. That is not a reflection of me, that is a reflection of my disease. It is unpredictable and life threatening. That is not my fault.

You probably want me to tell you how awesome I’m doing now, but I can’t. Since sitting in that hospital room my battle has only continued. My cornstarch regimen has changed twice and this last time I was taken off Glycosade, meaning I am now waking up every three hours throughout the night to take cornstarch. The shooting pain in my side is my daily reminder that life is temporary. I get short of breath just from talking and am having to take breaks while walking to class because my legs hurt too much. The numbness in my hands has spread and the swelling is honestly embarrassing. My blood sugar at any given point has been between 40 and 78. (For those of you without GSD, the ideal blood sugar is between 80 and 120.) I’m not as social as I used to be and a few of my friends decided not to stick around because of it. This battle is hard, and I don’t know if I’ll survive, but I am trying. I know it all seems horrible and sometimes it really does suck, but that isn’t enough to make me give up. I will continue to fight my own body until I no longer have to.

I’m not sharing this for sympathy. I’m sharing this as a reminder that you never truly know the battle someone is facing. We all have secrets, but I’m tired of this being mine. I was completely shattered in that hospital room and I am still putting the pieces back together. It’s not perfect and it’s not easy, but I refuse to give up. And I refuse to continue alone.